It’s not just the spelling that differs.

Convection and conventional baking are different in so many ways. While convection ovens are better than standard ovens in some aspects, some food types still need the latter to taste and look good.

The secret lies in how each cooks the food. 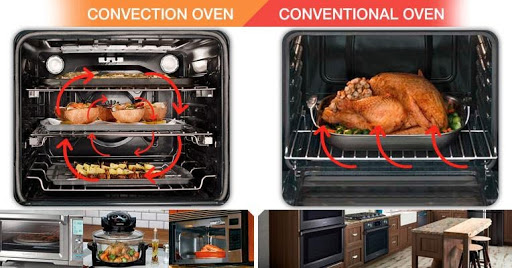 How Food is Cooked

Convection ovens bake food through a fan/exhaust system, which makes sure that it heats up evenly throughout the whole pan. However, this makes the food cook drier than your standard oven. The good thing is that cooking can be cut down around one-fourth out of the usual time. So, with convection ovens, you can ideally save more energy.

Conventional ovens, by contrast, bake food by heating coils on top and below the racks. By this, you will have crispy tops and crusts on pies while keeping the food in between moist. One disadvantage of this is that the inner part of the food will have cooler temperature than the outside. In some cases, maybe even still raw. In other words, you need to cook longer. To compensate, most dishes have to be cooked for a minimum of an hour.

Which Food is Best for Each Type of Oven

Most chefs prefer conventional baking because of the humidity and that pastries tend to rise more beautifully than with convection ovens. Of course, it’s not to discount the traditional top and bottom baking arrangement which is mostly the basis for most baking recipes.

But you can actually bake up a decent batch of baked goods from both types.

Overall, here are the usual culinary creations that work best for each type of oven:

Anything that needs to be cooked dry

Homemade Chips that you want to be crispy

Nuts and vegetables to be toasted

Fluffy cakes such as souffles and custards

Dishes and pastries with thick filling

Casseroles that are at least one inch thick

One tip that serves your convection ovens best is that you may have to tweek a recipe’s temperature by at least 25 degrees from the temperature set in the recipe.

You may also have to check the status of the food ever so often. While there are plenty of recipes using convection ovens, not much is known in the secrets of cooking the food that way. You need to check as much as you can.

If you have any qualms about using convection baking, you can turn off the fan for a more traditional cooking kind of feel.

To conclude, if you tend to bake nice juicy pastries that need slow rising, go for standard ovens.

But if you want the dryish pastries, go for convection ovens.

If you are not sure which one to get, at least select a convection oven that you could turn off the internal fan to simulate traditional baking.